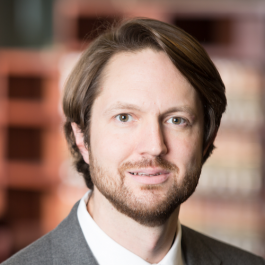 Professor Peoples’ research and scholarship is focused on comparative law and on the impact of technology on legal research, the judiciary, and the law. He has published articles, books, and book chapters on these topics. Professor Peoples’ scholarship has been cited by appellate courts, in the leading comparative law casebook, in several treatises including Wright and Miller’s Federal Practice and Procedure and by Judge Richard Posner of the United States Court of Appeals for the Seventh Circuit.

He is co-founding editor of the Legal Information and Technology eJournal on SSRN and is an Editorial Board Member of Legal Information Review. He teaches advanced legal research classes, the Norick Municipal Law Research Clinic, and is a frequent lecturer in law school classes. Professor Peoples is active in professional organizations including the American Association of Law Libraries and Association of American Law Schools. He is past-president of the Mid-America Law Library Consortium and Mid-America Association of Law Libraries.

He served as the Director of International Programs for the School of Law from 2007-2010. In that position he developed the innovative Certificate in American Law Program. Prior to his appointment as Law Library Director in 2010 he served as Associate Director, Associate Director for Faculty and Research Services, and Head of Reference Services. Before joining the faculty Professor Peoples practiced law in Oklahoma City. He is admitted to practice in the State of Oklahoma, Western District of Oklahoma, and Tenth Circuit Court of Appeals.