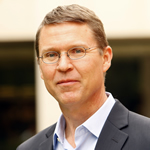 Before he received his law degree in 1990, J. H. (Rip) Verkerke earned a master's of philosophy in economics. Verkerke joined the Law School faculty in 1991 and teaches employment law, employment discrimination law, contracts and a seminar on law and economics.

While at Yale, Verkerke was articles editor and articles administrator for the Yale Law Journal and held a number of fellowships, including the John M. Olin Fellowship in Law, Economics, and Public Policy. After graduation, he clerked for Judge Ralph K. Winter Jr. of the U.S. Court of Appeals for the Second Circuit.

In June 1996 Verkerke received a three-year grant from the University's Academic Enhancement Program to establish the Program for Employment and Labor Law Studies at the Law School. He served as visiting professor of law at the University of Texas at Austin in the fall of 1997. Verkerke also participated in an ABA project to draft a new labor code for the transitional government of Afghanistan. In 2007, Verkerke received an All-University Teaching Award from UVA, and in 2011, he was selected as an inaugural member of the University Academy of Teaching.