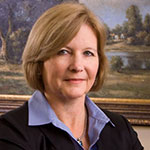 Professor Floyd is the author of numerous law review articles and is a frequent speaker at academic and law conferences. Her teaching and research interests include Ethics, Legal Education, Civil Procedure, and Evidence. She has a particular interest in the ways in which higher education shapes students’ ethical development and in the possibilities for cross-disciplinary collaboration within higher education. Professor Floyd was named a Carnegie Scholar by The Carnegie Foundation for the Advancement of Teaching in 2001 in support of her research on the development of professional identity among American law students and participated in the Carnegie Foundation’s 2007 study of legal education, William M. Sullivan, et al., Educating Lawyers: Preparation for the Practice of Law. She was an invited member of the Foundation’s Life of the Mind for Practice Seminar, focusing on the relationship between liberal education and professional education, whose findings are reported in William M. Sullivan & Matthew S. Rosin, A New Agenda for Higher Education: Shaping A Life of the Mind for Practice. Recent scholarship includes work on effective pedagogy for developing lawyers’ capacities for practical wisdom and on cross-disciplinary comparisons between legal education and clergy education regarding professional formation.

Professor Floyd is an elected Fellow of the American Bar Foundation, the Lawyers Foundation of Georgia, and the Texas Bar Foundation, and is admitted to the State Bars of Georgia and Texas. She has served on numerous professional committees, including currently serving as a member of the ABA Professionalism Committee and formerly as a member of the ABA President’s Council on Diversity in the Profession, the State Bar of Georgia Diversity Program Committee, and the Macon Bar Association Advisory Committee. She is a Master of the William Augustus Bootle Inn of Court in Macon, Georgia.