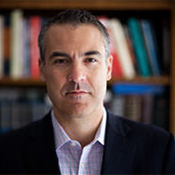 John Fabian Witt is Allen H. Duffy Class of 1960 Professor of Law at Yale Law School. His most recent book Lincoln’s Code: The Laws of War in American History was awarded the American Bar Association's Silver Gavel Award, was selected for the 2013 Bancroft Prize in American history, was a finalist for the Pulitzer Prize, and was a New York Times Notable Book for 2012. He has taught torts for fifteen years at Yale, Columbia, and Harvard.

Professor Witt’s previous writings includes the prizewinning book, The Accidental Republic: Crippled Workingmen, Destitute Widows, and the Remaking of American Law (Harvard University Press, 2004) and Patriots and Cosmopolitans: Hidden Histories of American Law (Harvard University Press, 2007). He has authored articles in the American Historical Review, the Columbia Law Review, the Harvard Law Review, the Yale Law Journal, and other scholarly journals. He has written for the New York Times, Slate, the Wall Street Journal, and the Washington Post. In 2010 he was awarded a John Simon Guggenheim Memorial Foundation Fellowship for his project on the laws of war in American history. Professor Witt is a graduate of Yale Law School and Yale College and he holds a Ph.D. in history from Yale. He is a fellow of the American Academy of Arts and Sciences. He served as law clerk to Judge Pierre N. Leval on the United States Court of Appeals for the Second Circuit.