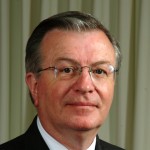 Professor Nelson received his B.S. degree in Accounting from Abilene Christian University and his J.D. from The University of Texas at Austin in 1965. From 1965-1971, he was an associate with Sheehy, Lovelace & Mayfield in Waco, Texas. He was a member of the faculty at Pepperdine University School of Law from 1971 to 2004 and became dean of the Thomas Goode Jones School of Law in 2004. He has been teaching wills & trusts for twenty-five years. He also teaches property and community property. His publications include Nelson and Wendel, California Real Estate Law and Practice: Statutes and Regulations (Bender, 1993-96) and Nelson and Wendel, An Estates in Land and Future Interests Primer (West, 1996).