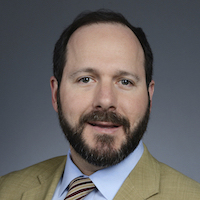 Professor Trachtenberg received his J.D. from Columbia Law School, where he was an Articles Editor on the Columbia Law Review. He has an M.A. in International Studies from the University of Limerick and a B.A. from Yale in Political Science, with distinction. After graduating from law school, Professor Trachtenberg clerked at the U.S. Court of Appeals for the Second Circuit with Judge José A. Cabranes.

In 2012, Professor Trachtenberg received the Gold Chalk Award for excellence in teaching from the MU Graduate Professional Council. In 2014, he won the Provost’s Outstanding Junior Faculty Teaching Award, and in 2015, he received the Husch Blackwell Distinguished Faculty Award from the School of Law. In 2018, he received the Provost’s Faculty Leadership Award for University Citizenship, and he won the UM System President’s Award in that category in 2019. Professor Trachtenberg chaired the MU Faculty Council on University Policy during 2015-2016 and 2016-2017.