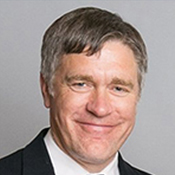 Professor Lininger grew up in southern Oregon. He earned his undergraduate degree at Yale, and his law degree at Harvard. He has worked as a federal prosecutor, as counsel to a subcommittee in the U.S. Senate, and as a litigation attorney with the law firm Skadden, Arps, Slate, Meagher and Flom in San Francisco. Lininger joined the UO faculty in 2003.

One of Lininger’s research’s interests is the Confrontation Clause of the Sixth Amendment, particularly the application of the clause to prosecutions of domestic violence and sexual assault.  Bonnie Campbell, the former director of the U.S. Violence Against Women Office, commended Lininger as a "national leader in the prosecution of domestic violence." He has authored legislation that addresses the unique challenges faced by complainants in prosecutions of domestic violence and rape. In 2006, Senator Joseph Biden's staff invited Lininger to participate in a work group advising the U.S. Senate Judiciary Committee on legislative strategies to meet the Supreme Court's new confrontation requirements for hearsay in criminal prosecutions. Lininger’s research on domestic violence and sexual assault has been cited by the U.S. Supreme Court, the New York Times, and the Washington Post.

Lininger’s latest research focuses on the intersection of environmental law, ethics and criminal procedure. As a former prosecutor of environmental crime and a plaintiff’s attorney who sued polluters, Lininger is interested in customizing ethical and procedural rules for the unique context of environmental advocacy. Lininger has served on the state board of directors for the Oregon Natural Resources Council. He is the ethics advisor for the Sustainable Future Section of the Oregon Bar, and he is a member of the Ethics Committee for the American Bar Association’s Section on Environment, Energy and Resources. Lininger has recently presented his environmental scholarship at Yale, Columbia, NYU, Washington, Utah and SMU, as well as at conferences sponsored by the National Science Foundation and the American Bar Association.

The University of Oregon has given Lininger awards for teaching, scholarship and service.  In 2006, Lininger received the Ersted Award for Distinguished Teaching. In 2008, he received the Lokey Award for Faculty Excellence. In 2010, he won the Hollis Teaching Award.  In 2017, he received “Pillar of the Community”Award.